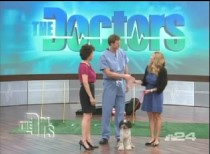 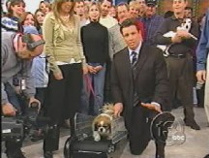 (ABC - 2008) Chris Cuomo gets down on one knee to show off the JOG A DOG treadmill for dogs. 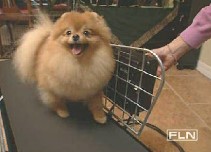 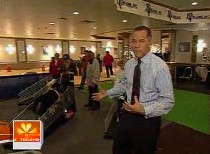 (FLN - 2008) TV Series "I Want That!" In search of the latest hi tech toys, producers meet with JOG A DOG owner Victoria Oelerich.

(1989 - 9 NEWS) Hollywood reporter Cary Berglund visits a store in Los Angeles that caters to the exercise needs of its four legged customers.

(2008 - NBC) Preparing for the Westminster dog show, Lester Holt discovers the JOG A DOG treadmills in the basement of New York's Pennsylvania Hotel.

(2008) Jog A Dog was asked to provide three treadmills for the reality TV series Greatest American Dog. Contestants were provided with luxury accommodations that included state of the art fitness equipment.

(2005) Loading Up Lassie article by Lee Harrington.   Geek out your dog with a JOG A DOG treadmill. Speaking of not getting up, skip the walk and put your pooch on the Jog A Dog.

(2008 - REUTERS) Photo By Shannon Stapleton: Uno, a beagle, jogs on a treadmill inside the Pennsylvania Hotel in New York February 8, 2008. Dogs from all over will compete in the 132nd Westminster Kennel Club Dog Show. (he won!)

(2000 - Warner Brothers) This is a scene from the hit movie Best In Show. The Weimaraner is exercising on a JOG A DOG treadmill. This scene is also depicted on the back cover of the DVD.

(ABC - 2008)  Dr. Marty Becker teaches a Caviler from the New York ASPCA to use a JOG A DOG treadmill.

(2010)  Profile of the Westminster dog show including an indoor puppy spa and gym. 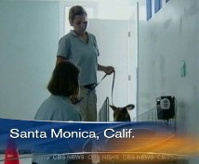 (2007 - KSDK)  Reporter Jennifer Blome receives an in home lesson on how to use a JOG A DOG from Purina trainer Ryan Sapp. Her three dogs receive walks daily but it is not enough to keep the weight off. After a few weeks of practice on the JOG A DOG Jenifer's dog Roy is close to his goal weight.

(2008 - HGTV Episode HDOGD-S06 )  HGTV caught up with JOG A DOG at the Westminster dog show in NY. They interviewed handlers asking a wide range of questions concerning the benefits of using JOG A DOG to achieve success

(1989) Consumer Trends -  Reporter Stan Chambers visits a store in Los Angeles, For Pets Only, that charges for treadmill time on the JOG A DOG.

(2008 - HBO Real Sports with Bryant Gumbel)  Bernard Goldberg takes a behind-the-scenes look at the pomp and pageantry of the Westminster Dog Show.

(2005) Exercising your best friend can sometimes be problematic and, boy, do they need exercise. But when there is blizzard outside, or you don't have much time, or you're plain lazy then the JOG A DOG is for you.

(2002 - stlcommercemagazine) Article by Laurie Burstein: Working like a dog. Exercise isn't just for people, it's for owners who want their pets to be in tip-top shape. Last August, Ralston Purina (now Nestleé Purina PetCare), held a Smart Spa for owners who wanted to pamper their pooches.

(2006 - NBC Sports) A woman helps her dog off the jog-a-dog device at the Hotel Pennsylvania. Hotel Pennsylvania on Seventh Avenue that is known the world over as the host hotel catering to VIPs — Very Important Pooches.

(2007 - CBS) People may not be the only members of a household in need of a good workout. Dr. Debbye Turner reports that a trip to the gym might be just what the doctor ordered for some overweight pets. A dog gets some exercise at Canine Fitness Center. 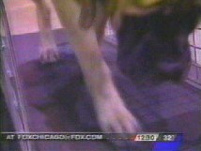 (2008 - FOX) Fox news catches up with JOG A DOG at the International Dog Show in Chicago. A Bull Mastiff exercises on the treadmill at the McCormick center.

(2004 - The New York Times ) Pam Lambie and her Pharaoh Hound in the exercise area of the Westminster dog show.

(2006 - Sports Illustrated)  Knotty runs daily (often to disco music) in Sherman's Topanga, Calif., home on the Jog a Dog, a treadmill that's longer (72 inches) than those at most gyms.

(1999 - New York Times) artricle by Laurence Zuckerman.     Casey the Golden Retriever  is going for glory on the JOG A DOG preparing for the Westminster dog show.

(2010 - NATGEO KIDS) Our children were surprised at school when they opened up their copy of National Geographic Kids to see their dad's JOG A DOG featured under "COOL INVENTIONS".

(2009) Making a Home in the Hamptons:  Leslie and Art Solnick are ready to become homeowners in the Hamptons. They need a place to accommodate their dogs!

(2009) The New York Times - Sensors and Chips Trained to Serve Pets.  "The easiest way to deal with destructive behavior is with exercise"

(2014) New 5-Star Singapore Hotel is Fit for Humans, But Made for Pets.  "There's limo service, a pool, a spa and a small fitness center complete with trainer."

(2015) Fox and Friends celebrates national pet day by promoting exercise and fitness for your pets.

(2015) To make sure the dogs stay in tip top condition during the cold, snowy winter months, Clafflin has the dogs work up a pant on a treadmill! They spend about 15 minutes each day on it.

(2016) Olivia Smith with ABC news reports from the Hotel Pennsylvania - "Watch the Pooches at Westminster Get Pampered."

(2016) NY1 Follows the dogs to The Hotel Pennsylvania for the Westminster dog show.  JOG A DOG Gym featured.

Roz Varon - what does it take to be best in show?  A look inside the IKC Dog show in Chicago, IL.

The Price is Right

(2017) JOG A DOG is featured on the Price is Right.  A Bob Barker tribute special to cellebrate pets.

(2017) Meet the 'doggie concierge,' here to meet all your Westminster needs.

(2016) Reese Watters checks out the JOG A DOG treadmills - 600 dogs stay at one hotel during Westminster Week.

(2017) Dogs Get Ultimate Pampered Pet Treatment Ahead of Westminster Show.

FUN FACT - DO YOU REMEMBER THIS SUPER BOWL COMMERCIAL? 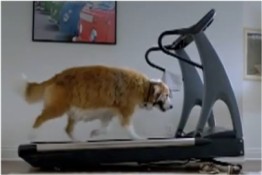 In this 2012 VW Beetle commercial an overweight dog named Bolt works out to lose weight so he can race the new car down the road.  This was a highly guarded project due to the success of the prior year's commercial.  Everyone was anticipating what they were going to come up with for 2012.  About a month out, producers for the commercial contacted JOG A DOG and we hooked them up with a JOG A DOG treadmill borrowed from a Veterinary facility near them. They trained the Australian Shepherd–St. Bernard mix on the JOG A DOG.  In fact they liked the JOG A DOG so much they requested written permission to air our treadmill in the commercial.  Unfortunately, the storyline must have taken a slightly different direction.